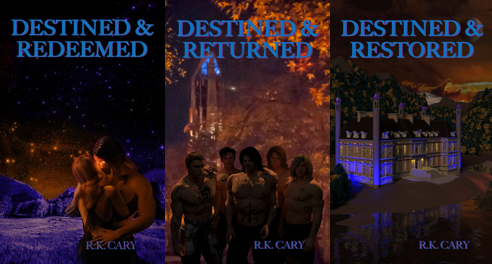 All 3 Books in the Destined & Redeemed Series Now Available on
Amazon to purchase or read for FREE on Kindle Unlimited:


Sign up at the link below to receive my Newsletter to know when my next book is available!

Read a portion of Book 1 for FREE

He was from a world that had suffered horrendous losses and he had committed revolting acts just to survive. He knew he had hurt others and took their very freedoms away. He wasn’t evil or merciless. He was as much a victim as they were, a casualty of circumstance: raised to be stronger, pushed to be smarter, better, tougher, and faster than everyone else. His destiny had been set long before he was born, survival his only option.

She woke up in the middle of a nightmare that was her new reality. Her choice was clear - fight it or accept it. Her choice would determine if she could save her world. She was a strong woman who believed in acceptance and forgiveness. Her beliefs would be put to the test. Her life would never be the same again. Would she be strong enough to not only survive, but be able to embrace this new life? Could she accept this situation and accept him, accept who and what he was? To do so, she would have to be able to forgive him. Would she be able to, and against all logic, would she be able to love him?
​
For better or worse, till death do they part, when all hope was lost, fate put them on the path that they were destined to be on, to save both their worlds.
​
The saga begins…Destined & Redeemed 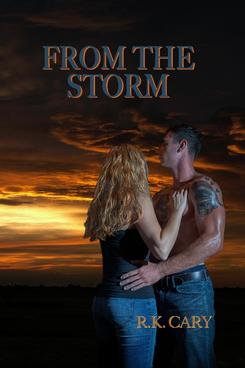 Other Books by RK Cary:
​
From the Storm

Cassie and Josh Mitchell had a relationship that worked for them that few others understood. He was career military, serving in a Special Ops unit, defending and protecting on missions he couldn’t discuss even with her. Cassie was independent, loved him, and carried on raising their three children during his many, lengthy absences. The US military has a secret Josh is well aware of and that secret came…From the Storm.

​This is turning out to be an amazing journey for me. Characters have been whispering their stories to me for years, usually when I lay my head down and turn out the lights. Until recently, I have been too busy and have told them to be quiet. No longer! I'm excited to bring them alive and share them. In listening to the characters, I am thrilled by the growth I am experiencing in both my writing and my knowledge. These characters are like old friends to me at this point. I hope I have done them justice in these stories. Writing this series, Destined & Redeemed, has brought me much pleasure. I hope you enjoy reading it as much as I have enjoyed writing it.

My sisters Charlie and Margaret have joined me on this journey writing their own stories in different genre's than mine. I hope you will check them out and give their stories a look. They inspire me to better my writing. Nothing like a little friendly sibling rivalry!

When I am not writing I am hanging out with the two dogs and cat that think they own my house, or I am at the beach, or planning a beach vacation or a cruise (to someplace with a beach).