Read all my books for FREE with Kindle Unlimited or buy for $2.99 on Amazon


Scroll down to see all the covers for Books thru Book 13!​

Book #1, Operation: Protected Angel has been on Amazon's Best Sellers List nearly every day since it was published (that's over 2 years!) reaching #16 as the highest ranking. When offered for FREE for 5 days in July 2020, it reached #1 on the FREE Best Sellers List!
They took the oath to support and defend the constitution against all enemies, foreign and domestic.
This unit can protect someone in trouble like no other because they work in the shadows, invisible, and outside the system where the rules don’t apply - just the oath they took. They don’t exist. That’s also why they can break any suspect and can get answers out of anyone accused. That’s when they’re called in, when someone must be protected at all costs, or when answers have to be obtained, by any means necessary. Sometimes it’s not clear, though, is the person in their custody a witness or the perpetrator, a friendly or a foe, innocent or guilty as sin?

Book 1: Operation Protected Angel
Angel Matthews fits into this category – where exactly needs to be determined.

Book 2: Operation Recruited Angel
Madison Miller planned to make the Army her career. But after a mission went horribly wrong in the Middle East, she separated after serving ten years. For two years she was a happy civilian who didn't have to question if women or children were going to blow themselves up to take out those who were there to help them. Nor did she have to make the call on whether to neutralize a threat or not, based solely on her instincts.

She thought she'd dealt with the ghosts from her past. She realized that she had thought wrong when Shepherd Security approached her with a job offer that she couldn't refuse.

Shepherd Security accepted two cases they need a female Operator to complete. A LinkedIn search brings them to Madison Miller. Convincing her to take the job is the first step. Her rushed training on the male dominated team is the next. For Cooper, acting as her Supervisory and Training Officer, his biggest hurdle will be keeping his interest in her professional. She's beautiful, intelligent, more than capable - a complete spit-fire he can't resist.


Book 3: Operation Dark Angel
Sienna Andrews found herself in danger, alone, and out of options. She ran...straight into the arms of Razor from Shepherd Security, who, has been under cover in a joint Shepherd Security-DEA mission for six long months.
​
Intrigued by this mysterious woman, Razor makes finding out who she is and what she’s running from his mission. He quickly realizes that she is desperately in need of his protection and is as innocent as she is attractive, not what he’d expect of a woman hiring him to help her disappear.

With the entire agency backing him up, her secrets don’t stand a chance of remaining hidden. Her biggest secret is that she just might have everything to do with his mission. The question is, will she trust him and Shepherd Security?

Shepherd Security Operative, Doc, accepted he was going to die…now, he has to remember how to live.

Shepherd Security has its mental health protocols in place for a reason. PTSD is real. Returning from a mission to Africa that should have ended him, Doc finds out firsthand how real it is. He has a past that only Dr. Lassiter, the team shrink, knows about, a past that they both thought Doc had dealt with. They both thought wrong. The events in Africa trigger dark thoughts and feelings that Doc can’t get past.
Over the years, his team has accused him of being grumpy or worse. He’s a stickler for the rules and frowns upon anyone breaking protocol, something he finds he can’t forgive himself for doing either. He is the oldest of the Operators with the big 4-0 quickly approaching, another issue adding to his internal conflict. Doc knows he is cynical and jaded. And he knows that he is the last person any woman needs in her life.
Elizabeth is a strong willed and stubborn twenty-four-year-old who has faced more adversity than most. The thing is, she doesn’t seem to know it. And Doc knows she is way too young for him. She isn’t the type of woman he’d ever pick for more reasons than just her age, but she needs his help and needs to have faith in someone or something. In her darkest moments, he is there, her hero.
Could she be just what Doc needs to finally be free from the past that has haunted him for over fifteen years?

Gary ‘the Undertaker’ Sloan, Navy SEAL, sniper and corpsman on Shepherd Security’s Delta Team, left the Sloan Family Mortuary and Funeral Home in Cleveland, Ohio in the hands of his brother and joined the Navy after the death of his father.

When he left Cleveland, he also left his high school sweetheart and fiancé, Kennedy Bristow, who was more interested in pursuing a career in music than she was in being a military wife. The parting was somewhat mutual, at least that was what Sloan told himself over the years.

​When Gary gets a call from his brother that Kennedy is laying on their prep table, the victim of an execution-style shooting, he immediately returns home. He soon discovers that things are not what they seem. It will take all his skills and the help of the entire Shepherd Security Team to get to the bottom of the murder and bring those responsible to justice.

Just as he prepares to leave on a mission with his team, Shepherd Security Operator Brian ‘the Birdman’ Sherman receives a call from his brother, Bobby, pleading with him to come home to Louisiana to help him. Bobby’s been arrested again and needs Brian to help get him remanded into drug rehab, rather than jail.
Little does Sherman know that his brother is not being completely honest with him.
Brielle Jarboe is Bobby Sherman's best friend. She is a full-time Bayou Guide, part-time reporter who is chasing her dream of getting a job in the big leagues of journalism. She writes a blog on happenings in the Parish, a hard-hitting, real news, no-fluff blog that has called out people and businesses in the Parish and brought a lot of unwanted attention to herself.
She knows something isn’t right in the Bayou, but she doesn't know that she has the story of her life, a story that just may get her killed.
Enter Brian Sherman and Shepherd Security. ​

Shepherd Security Operator Danny ‘Mother’ Trio is a proud United States Marine Raider, the Marine Corps’ Special Forces Team. He is calm and steady. He has always put his brothers and sisters in arms, the team, and the mission first. He has an online friend he’s never met. He has played word games against her for five years. Just seeing a message from her in the in-game chat screen, always lifts his mood. Messaging her and playing his games against her is the last thing he does before a mission and the first thing he checks after. He knows very little personal identifiable information about her, but he knows that she is a good person, a highly intelligent and engaging woman who is just as competitive as he is. On-line, they have an amazing relationship that he treasures. After a particularly rough mission, he decides he wants to meet her.
Dr. Annaka Sanchez loves her life. She’s a marine biologist lucky enough to study beluga whales in their natural habitat. She’s never been one who thinks she needs a man in her life and a relationship hasn’t fit into her busy life. But there is one man who she has been playing a scrabble-like on-line word game against for years who she loves to chat with in the in-game chat function. At times, their chat has been flirty. He is funny, smart, and a competitive player, traits that she finds attractive. All she knows about him is that his first name is Danny. She doesn’t know how old he is, where he lives, or what he does for a living, but she has fantasized about meeting him.

Book#8: Operation Beach Angel
Landon ‘Lambchop’ Johnson, Navy SEAL, Team Leader of Shepherd Security’s Delta Team, strong, resilient, proud, brave, highly trained, patriotic, Pastor. His teammates wonder how he reconciles the job he does with his deep, abiding faith.
Lambchop was brought up going to church services with his momma and grandma in Pittsburgh, before enlisting in the Navy at the age of eighteen. But it was on the battlefield that the teachings in his youth made sense to him, and his religious self was born.
There in hell, while he viewed levels of death and inhumanity that he could not have fathomed his belief and love for Jesus Christ took hold of his soul. He never hesitated to do his job as an Operator. God would sort them out. That was his job. Lambchop’s was to execute each mission with precision and to perform exceptionally, which is what he did.
He quickly earned the respect of his fellow Operators and the officers within the Teams. He was known as a straight shooter, a SEALs SEAL, a leader, and a Pastor. When Shepherd recruited him, he eagerly accepted the offer. He found a home at Shepherd Security and formed intense connections to the other men and women who worked there.
He’s watched his brothers fall in love, married them, baptized their children. In this installment of the Shepherd Security Series, Lambchop finds his soulmate amid the chaos of missions. 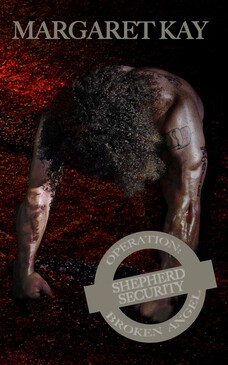 They say being a Military wife is the toughest job, even though there is no MOS for the position. As the veteran of more than a few deployments, I have to agree. My husband proudly served 8 years in the United States Navy. There has always been something about a man in uniform that got my blood pumping and my mind fantasizing. So what did I do when my man was halfway around the world - read Romance novels and fantasized about my own story lines, of course! I've just begun this journey and am thrilled to be taking it with my sisters, RK and Charlie. We all have different subject matter, but please check us all out.